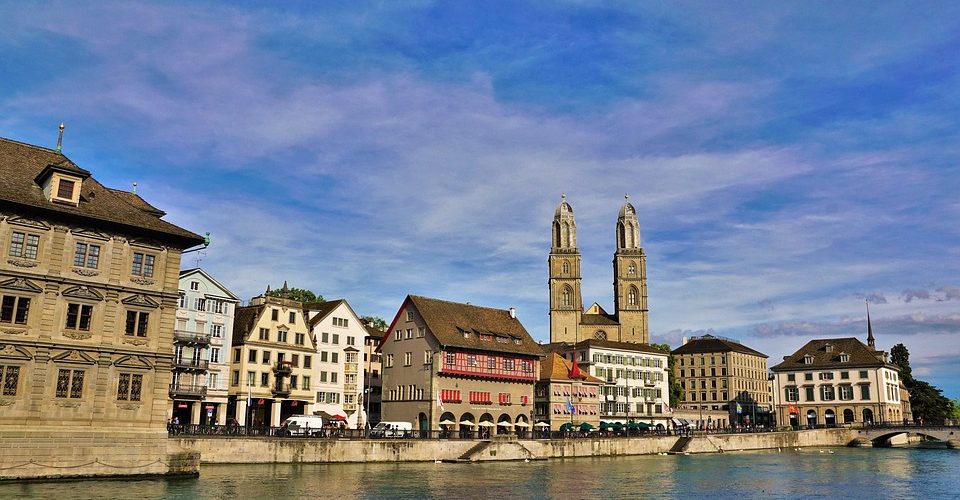 In addition to ESG and low-interest rates, topics such as value investing and commodities are once again attracting increased interest among private and institutional investors. Markus Hill spoke for FUNDBOUTIQUES.COM with Urs Marti, SIA Funds AG, about the connections between sustainability, oil, geopolitics, and the significance of nuclear energy in connection with the topic of climate change. The reflections are rounded off by an interesting literature reference on the topic of commodities – keywords: “Bible”, General Patton, Jackpot & Dividends.

Hill: Value investing and commodities seem to be experiencing a certain revival. How do you see this?

Marti: Actually, there is a lot that points to a trend reversal. If you look at the chart, there is still a long way to go. At SIA, we have been pointing out for some time the coming shortages due to the huge misallocations of capital and the resulting underinvestment. Robert Friedland has aptly described the decade that has begun as “The decade of the revenge of the miners” (see chart: “Ratio Growth / Value” Source: SIA Funds AG).

Hill: The topics of raw materials and supply security are followed with interest in the press. Did the recent Suez Canal incident have an additional impact on already strained supply chains?

Marti: It may sound a bit paradoxical, but Covid probably has parallels with the occupation of the Rhineland in 1919. In retaliation, workers stayed at home. This led to lower production, shortages, rising prices, and the inflationary spiral got going. In the commodities sector, there are always production shortfalls, for a variety of reasons. On average, about 5% of production capacity fails. If the market is sufficiently supplied, the stocks are full, this has hardly any lasting effects. However, when stocks are low and the supply is tight, it leads to significant price volatility. What is worrying about the current situation is that it affects practically all parts of the value chain: raw materials, electricity, transport, containers, equipment, etc. The situation is not as bad as it seems. Looking at the whole value chain, there is simply not enough investment (examples: mines, oil fields, power supply, shipyards, etc.). Chips are also needed not only in iPhones but also in ships, combine harvesters, etc. Take a look at the fields of study that are offered: Who is training to be a geologist, mining/petroleum engineer? Then there is politics. Demand is stimulated by printing money, but the supply side is made more expensive by countless measures, taxes, restrictions, regulations, and levies.

Hill: How do you see the connection between raw materials, China, India, and consumption?

Marti: China’s policy is undergoing a paradigm shift. They want lower trade surpluses, more domestic consumption, and a higher standard of living for the population. Outsourcing is taking its toll. There will be many changes, also concerning currencies. To put it bluntly, the so-called West has less raw materials at its disposal if China itself wants to consume more. China’s per capita consumption is currently one-third of that of the West. The coast in China is well developed, but the rest of the country is not. Pushing this development is, after all, one of Beijing’s main priorities. But it is not only about China. India will soon have more inhabitants than China. The standard of living and per capita consumption of these countries – raw materials and goods – is only a fraction of that in the West. Among the ten largest countries, the only representative of the so-called West is the USA. Next comes Indonesia, Pakistan, Brazil, Nigeria, Bangladesh, Russia, and Mexico.

Hill: ESG, climate change, and commodities are often discussed in the same breath. What connection do you see in this area, what particularly strikes you? What role does oil play in this context?

Marti: Human life is based on the use of the resources that exist on the planet. The basis of everything comes from mining, agriculture, hunting, fishing, etc. You can also stop the production of agricultural goods, then, brutally speaking, the population (number) also “decreases”; without support, CO2 emissions are then also reduced in a ratio of 1:1. Today’s division of labor and productivity is only possible thanks to industrialization. Without carbon, we would probably be at the level of 1860. The productivity of agriculture would probably be a tenth. 80% of the world’s electricity is generated by steam (90% fossil, 10% nuclear fission, the rest effectively by hydroelectric power). Inexpensive transport in large capacities is only possible with oil. Likewise, all products that are not naturally grown or made of metal are made of carbon. How to produce is another question, just like in any other industry. When I was a child, photos could be developed in Basel with Rhine water (at least that’s what they told me). Just as a VW no longer looks the same as it did in the seventies, the same is true of mining. It is arguably the most regulated industry in the world. It’s not like you can just start mining oil sands in Fort McMurray. There are the strictest environmental regulations in the world, billions are spent, there is renaturation, etc. By the way, many of the companies also have very good ESG ratings. For example, the biggest oil producers in the world are also the biggest companies in CO2 capture/storage. And just because many countries in the world no longer allow themselves to be patronized by the West does not mean that things have to be worse there. Why should a Western NGO, investment bank, or consultant have any say in the territory of China, Brazil, or Russia? Of course, there are always accidents, black sheep. In Switzerland, criminal proceedings have been opened against a transport company that is alleged to have illegally disposed of hundreds of tonnes of contaminated material. This is said to have led to the death of fish in the Blausee. It is easier to point the finger at other countries and other continents.

Hill: When it comes to the topics of sustainability, security of supply, and climate protection, one has the impression that the originally “ostracised” area of nuclear energy is being reintroduced into the discussion, one can almost speak of a de-tabooing. How do you assess the field of nuclear energy and its role in energy supply?

Marti: Anyone who spends just five minutes on the subject knows that we depend on a reliable, stable baseload. The only way to store electricity (on a large scale) is with pumped storage plants, which require mountains and dams. Or a stockpile of coal or a gas-fired power plant that can be quickly ramped up if it is not “windy” (Germany needs pipelines to compensate for this). Every form of energy generation has its advantages and disadvantages. Hydropower and nuclear power do not emit CO2. But flooding entire valleys in the mountains is not just fun either. In Switzerland, there was a project to flood the Urseren Valley in the 1950s. Mr. Sawiris has just built his Chedi Hotel there, huge sums were invested in mountain railways, railway stations, and hotels. A revival of this project would be even less well-received today than it was 70 years ago. Today, more electricity is produced by nuclear fission than before Fukushima. As everywhere, it is countries like China, India, Russia, and others that are expanding and will continue to expand in the future. This is less publicized, but China has created more new capacity for coal-fired power in 2020 than the entire existing capacity of continental Europe combined! These countries need electricity and are investing in all available energy sources. Coal, gas, nuclear, wind, solar, hydro. One can imagine that even a modern nuclear power plant looks different than it did in the 70s. It is amusing to see how people start talking about something just because Bill Gates & Co. are talking about it. People would start to invest in new technologies, small mobile nuclear power plants, etc. In February, China put the first nuclear power plant on the grid, which was developed entirely with its technology. The cost is estimated at 2.5 billion USD. It is believed that it would cost about 10 billion in western countries and such a project would have taken years longer. In 2019, Rosatom took Akademik Lomonosov, the first floating nuclear reactor, into commercial operation. It is exciting to browse a bit on the homepage of the state-owned company (100,000 employees) to see in which fields they are active. Medicine, logistics, etc. But you shouldn’t get too euphoric. Such things take time. There are 10 % of the existing fleet of nuclear power plants under construction. Thus, uranium consumption is likely to grow 1 – 2 % annually, as with almost all commodities. The problem here is also the supply side. There has been underinvestment, mines have been closed and suppliers have not renewed contracts on the procurement side. Again, we are very confident about the two best producers in the world, especially since you can get the companies and their assets at incredibly low prices.

Hill: Commodities are your passion. But you also like to read – technical books as well as other books. What was the last book you enjoyed “devouring”?

Marti: I recently finished reading “The Price” by Daniel Yergin. It is considered the bible of the oil industry and tells the development from the beginnings of Rockefeller’s Standard Oil to the Iraq war. I found the anecdote about the Second World War fascinating. The allocation of fuel for the allied troops in Europe was under the control of the British. General Patton could only advance very slowly with his tanks due to a lack of fuel. Montgomery was a British national hero and his fuel needs in North Africa were given priority. With a different fuel allocation, post-war Europe would probably have looked different. The Allies would have advanced much faster to Berlin and probably further east. The border between the Eastern Bloc and the West would have been further east. It is also exciting to see how thin the line between success and failure always is. Many oil companies have their origins in Standard Oil or its successor trusts (after the break-up of the group in 1911 due to the Sherwood Antitrust Act). BP was founded in 1908 as Anglo-Persian Oil after the discovery of a large oil field in Iran. The first headquarters were in Tehran. Royal Dutch was founded in 1890 to develop an oil field in Sumatra. These companies are among the oldest in the world, have paid huge sums in dividends, up to 50% dividend yield in certain years. Even such companies have been on the brink of collapse every 20 years. At one point Royal Dutch had already decided to stop an exploration project in the West Indies. When the exploration team was ordered to pack up on a remote island, they decided to drill one last time in the afternoon before leaving in the evening. It was the jackpot that ensured the survival of the company. Many such stories one read about, almost all of today’s big companies, which one thinks have always had a stable time. My point is, without taking entrepreneurial risks, success is not possible, just like in sports. At some point, you have to shoot at goal – with the risk that the ball might miss. What is fascinating is how solid companies with high dividends, low valuations, are now considered risky because of the general herd instinct. Meanwhile, many things that are unable to give the shareholder/commitment holder a healthy return are seen as solid investments because of the zeitgeist. You see, how I love history and alternative scenarios – in my field, this way of thinking is a fascination one gets creative.